"The Ceiling of the Paris Opera" Lithograph By Marc Chagall 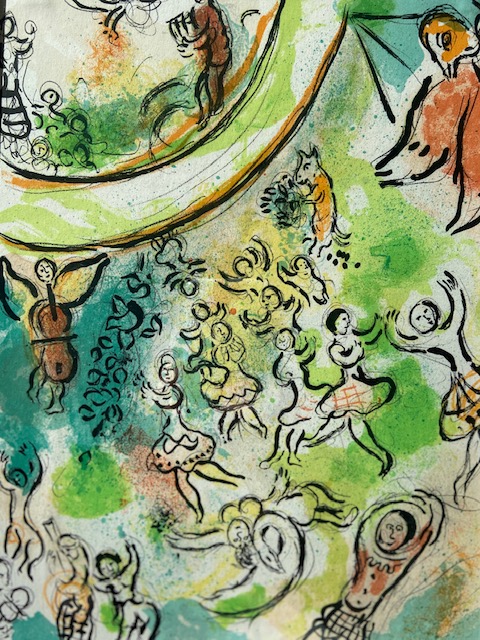 A lithograph frontispiece for the book "Le Plafond de l'Opéra de Paris (The Ceiling of the Paris Opera)" printed by Jacques Lassaigne (Paris: André Sauret, 1965) and created by Marc Chagall.

Depicting dancing figures, instruments, and animals in a black heavy line and colored in water colour style of a variety of greens and oranges.

Price: $1,300.00
For inquiries and questions, please email us at HoneywoodStudio@gmail.com 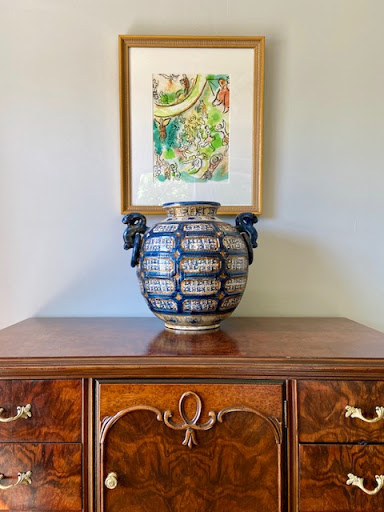 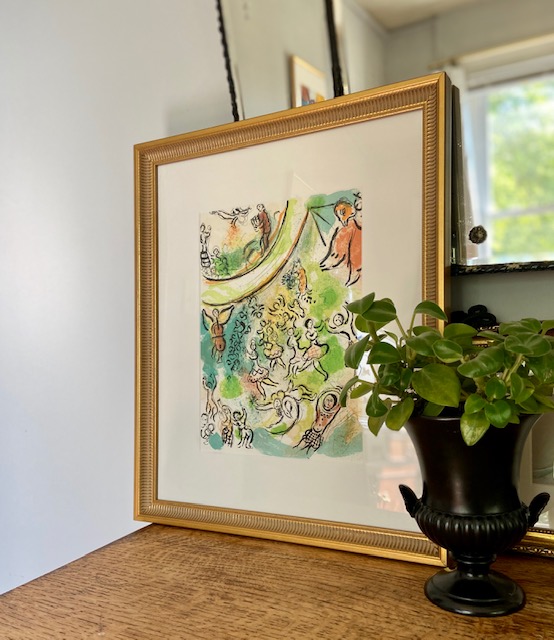 Marc Chagall was born on July 7, 1887, in Vitebsk, Russia. From 1907 to 1910 he studied in Saint Petersburg, at the Imperial Society for the Protection of the Arts, and later with Léon Bakst. In 1910 he moved to Paris, where he associated with Guillaume Apollinaire and

Chagall visited Russia in 1914 and was prevented from returning to Paris by the outbreak of war. He settled in Vitebsk, where he was appointed Commissar for Art in 1918. He founded the Vitebsk Popular Art School and directed it until disagreements with the Suprematists resulted in his resignation in 1920. He moved to Moscow and executed his first stage designs for the State Jewish Chamber Theater there. After a sojourn in Berlin, Chagall returned to Paris in 1923 and met Ambroise Vollard. His first retrospective took place in 1924 at the Galerie Barbazanges-Hodebert, Paris. During the 1930s he traveled to Palestine, the Netherlands, Spain, Poland, and Italy. In 1933 the Kunsthalle Basel held a major retrospective of his work.

During World War II Chagall fled to the United States. The Museum of Modern Art, New York, gave him a retrospective in 1946. He settled permanently in France in 1948 and exhibited in Paris, Amsterdam, and London. In 1951 he visited Israel and executed his first sculptures. The following year the artist traveled in Greece and Italy. During the 1960s Chagall continued to travel widely, often in association with large-scale commissions he received. Among these were windows for the synagogue of the Hadassah University Medical Center, Jerusalem (installed in 1962); a ceiling for the Paris Opéra (installed in 1964); a window for the United Nations building, New York (installed in 1964); murals for the Metropolitan Opera House, New York (installed in 1967); and windows for the cathedral in Metz, France (installed in 1968). An exhibition of the artist’s work from 1967 to 1977 was held at the Musée du Louvre, Paris, in 1977–78, and a major retrospective was held at the Philadelphia Museum of Art in 1985. Chagall died on March 28, 1985, in Saint-Paul-de-Vence, France.

In 1963 Chagall was commissioned by France’s Minister of Culture, André Malraux, to paint a new ceiling for the Paris Opera. His choice of Chagall, however, caused enormous controversy. Many felt a ceiling painted by a modern artist would clash with the Baroque style of the rest of the theater. “They really had it in for me,” noted Chagall, “It is amazing the way the French resent foreigners. You live here most of your life. You become a naturalized French citizen… work for nothing decorating their cathedrals, and still they despise you. You are not one of them.” Nevertheless, Chagall designed a sumptuous ceiling, drawing inspiration from the works of composers, Mozart, Wagner, Mussorgsky, Berlioz and Ravel. This detailed documentary contains dozens of color lithographic sketches and preliminary designs, as well as an original lithographic frontispiece and a poster-sized color plate of the final plan for the ceiling. Following its successful unveiling, Chagall remarked on his intention, “Up there in my painting I wanted to reflect, like a mirror in a bouquet, the dreams and creations of the singers and musicians, to recall the movement of the colorfully attired audience below, and to honor the great opera and ballet composers.” Text in French. Cramer 61. Sorlier 88. Sorlier Collection 434. 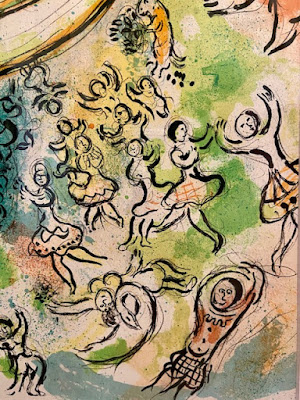 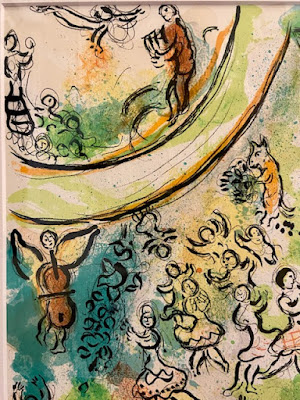 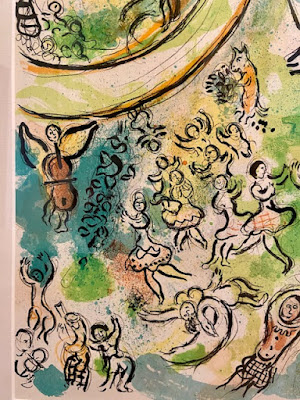 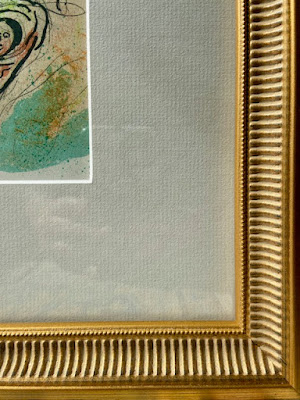 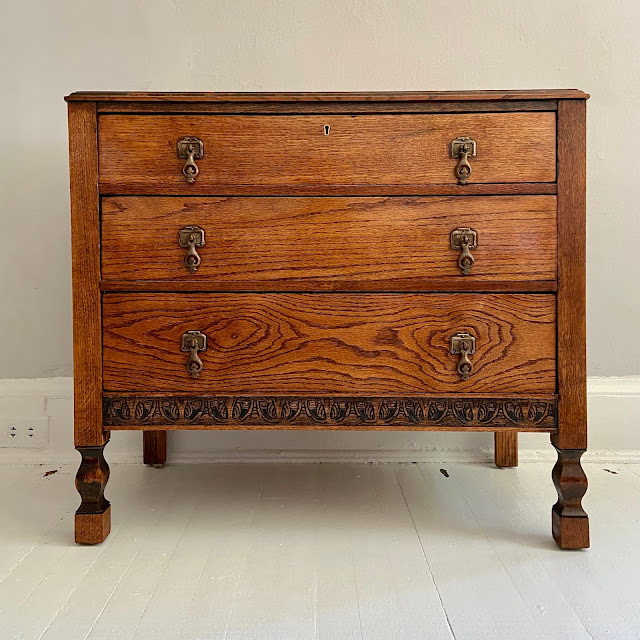 A wonderfully figured quarter-sawn oak chest of drawers with three drawers that graduate in size from top to bottom with original gothic themed drop metal handles. The handles are incised by the maker “AD 761713”.  The chest stands on four feet with the two front feet shaped in baluster form over block. The piece is adorned with two hand carved friezes in the arts and crafts theme located at the crest (top) and beneath the bottom drawer.

To bring this chest up-to-date it has been partially stripped and re-stained to enhance the oak grain and decorative carved features. The finish is warm and smooth creating a rustic feel.
The chest is in excellent vintage condition; the drawers open smoothly and the chest stands solid.

Please remember that this is a vintage piece, therefore it will show signs of character and slight wear unless otherwise specified. That being said we do refurbish all of our pieces to a good standard.

We are very happy to obtain a proper delivery quote based on your location. Please contact us and provide your zip code and if this going to a house /apartment and if there are stairs. 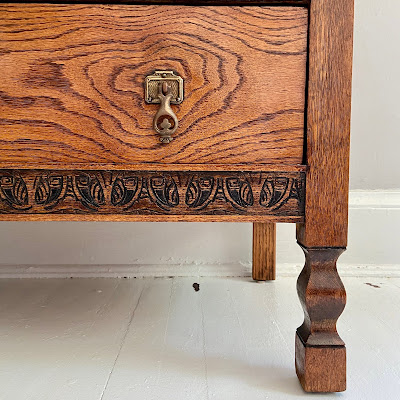 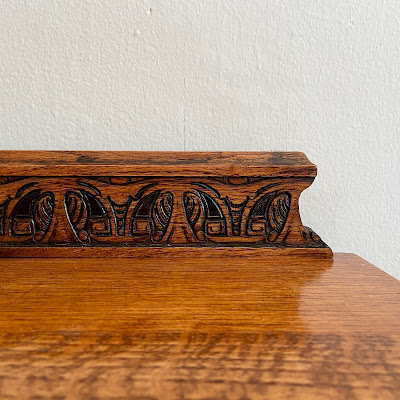 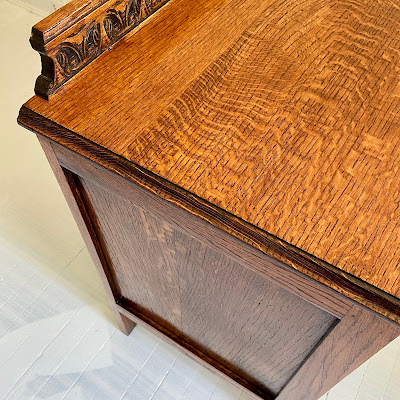 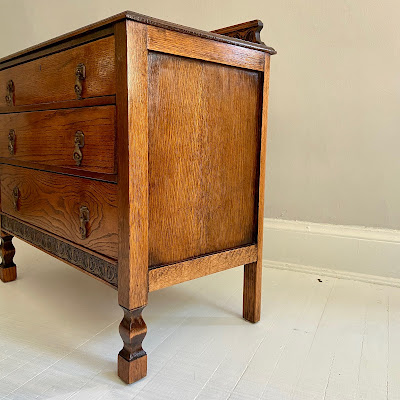 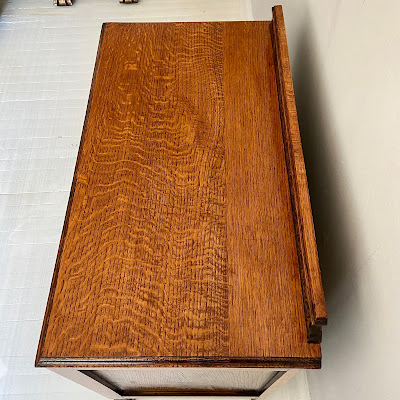 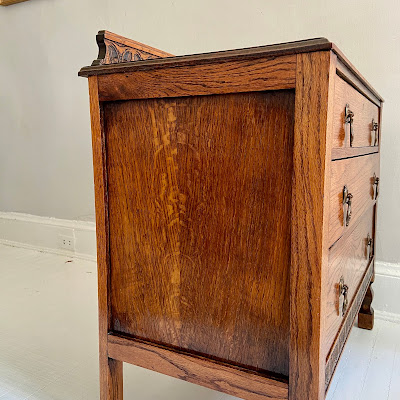 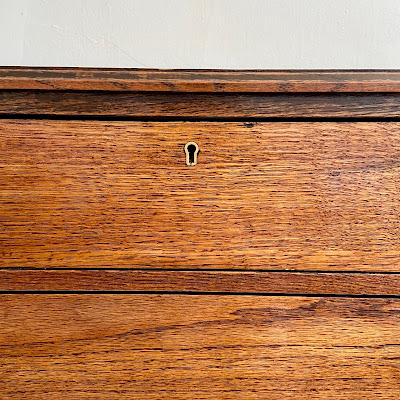 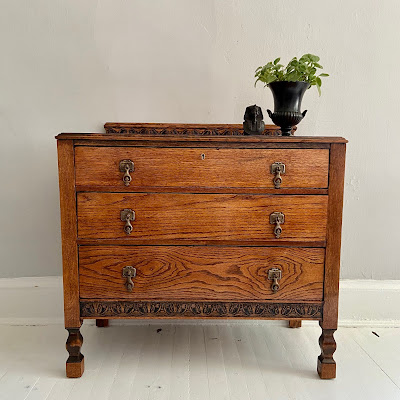 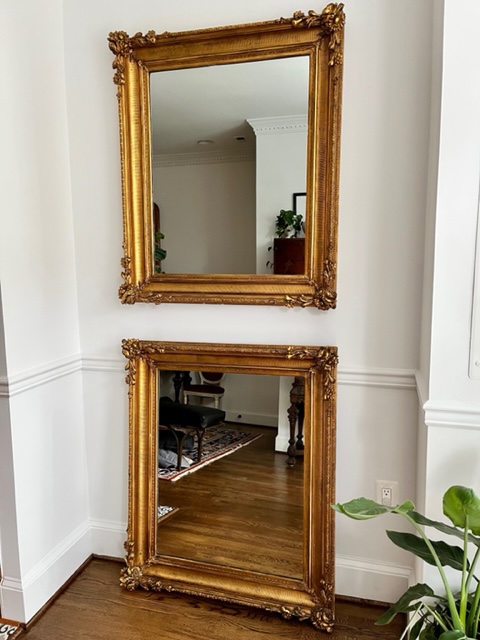 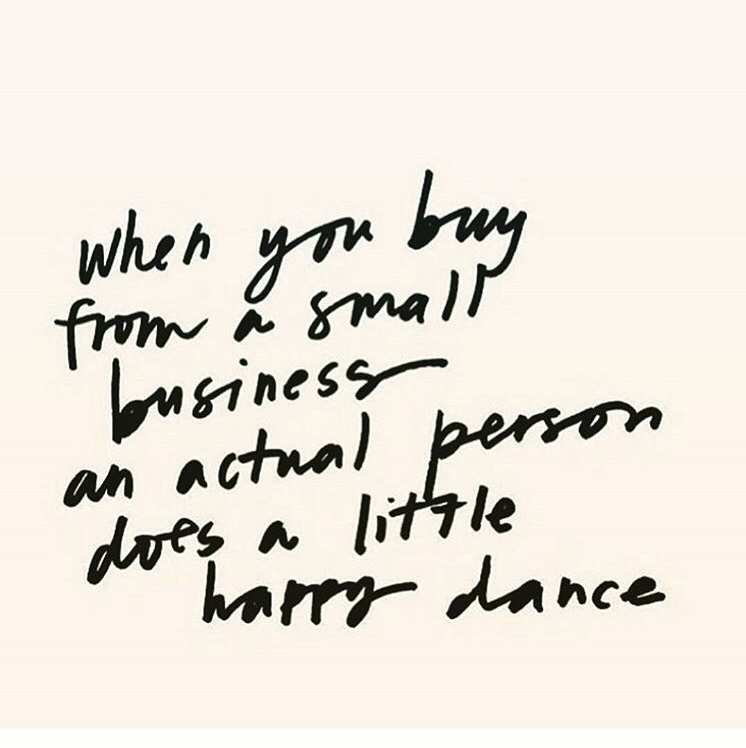 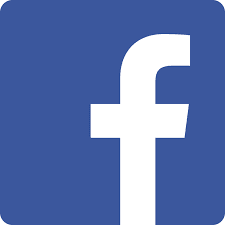 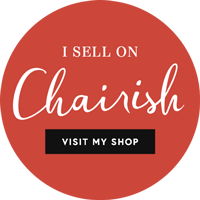